Fair Pay For Our Firefighters

Be it a medical emergency, a fire, a car wreck or a swift water rescue, we all know that we can rely on firefighters to be there for us. This is why firefighters are consistently ranked as the country’s most trusted profession (ahead only of teachers, I’m happy to say!). Conversely, those who are least trusted are lawyers and, erm, politicians (although this is something I’d certainly hope to change).

Becoming a firefighter isn’t an easy task. In the City of San Diego, there is only one new recruit training course every 1-2 years. Recruits are required to hold CPR and EMT certificates, and many applicants enter the department with four-year degrees. After a physically and mentally demanding 16-week training course, rookie firefighters spend a year on probation at a training station.

Firefighters across the city put their lives on the line every day, and 36 SDFD firefighters have died in the line of duty in recent years. The emotional toll that this career can take on individuals is high.

According to a recent KPBS article: 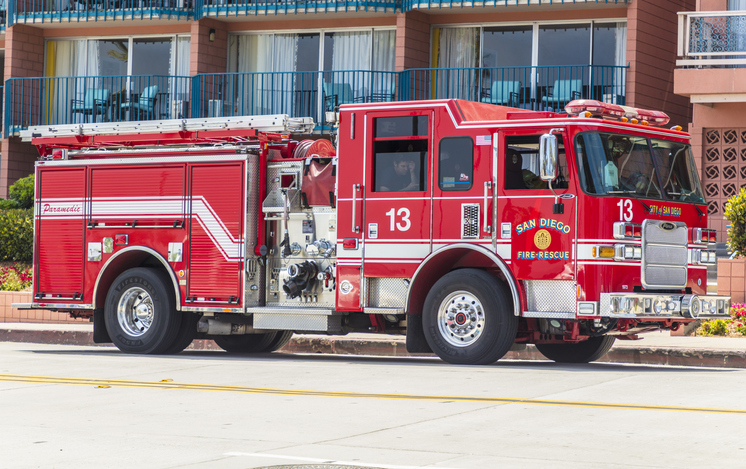 And how much do they earn for all this? A Firefighter I salary in the City of San Diego starts at less than $40,000 per year. In fact, SDFD firefighters are the lowest paid in the county, and earn far less than their peers in Orange and Los Angeles Counties. The impact of this salary disparity cannot be underestimated. San Diego-based firefighters are being recruited to join other fire departments, where they can earn 25-50% more than here. As a result, SDFD firehouses are chronically understaffed. Shifts, which are officially 24 hours in length, can often be 72 hours, requiring the city to pay out more in costly overtime.

In addition, the city has eliminated firefighters’ pensions (a move approved by then-councilman Kevin Faulconer), and Proposition B cut death benefits for all new city employees in 2012, including for all firefighters hired since then. Even though this may soon be reversed, a significant number of firefighters and their families still don’t have this protection.

As a result of this staff shortage, morale in the department is often low, firefighters are attending to emergencies while exhausted from the length of their shift and, most critically, response times are unacceptably high. Investment in new firehouses has not kept pace with our growing population, which, combined with a demoralized and underpaid firefighter community, presents a serious risk to public safety.

According to a report commissioned by the city in 2017:

“The City’s fire and emergency medical services have not kept pace with growth, partially due to the long recession, and are unable still to meet best practice outcome response times to all neighborhoods. To its credit, the City has staffed the fire crews at the best practice level of four personnel, but does not have enough crews to cover a city the size of San Diego.”

Those of us who were here in 2003 and 2007 will remember the devastating fires which impacted the region. I myself was forced to evacuate from the 2007 Witch Fire with my young daughter, and the 2003 Cedar Fire burned parts of the District 7 community of Tierrasanta. With current resources, the response to future disasters like this will be seriously diminished. In fact, one firefighter I recently spoke to told me that when (not if) similarly-sized wildfires happen in future, SDFD simply won’t be able to cope. As significant areas of District 7 are in high-risk wildfire zones, this could impact us in a very real, very dangerous way.

Although the City of San Diego finally increased police officer pay in 2017, to end the same salary-based staff shortage issues faced by our other brave first responders, and even though it committed to adding 220 more firefighters, this is over the next five years, so will do little to reduce the immediate issue. This is fast-becoming a public safety crisis, putting the lives of San Diego residents as well as the firefighters themselves, at serious risk. We need to find a fix to the fire department funding issues and bring salaries to an acceptable level before it’s too late. Our lives depend on it.